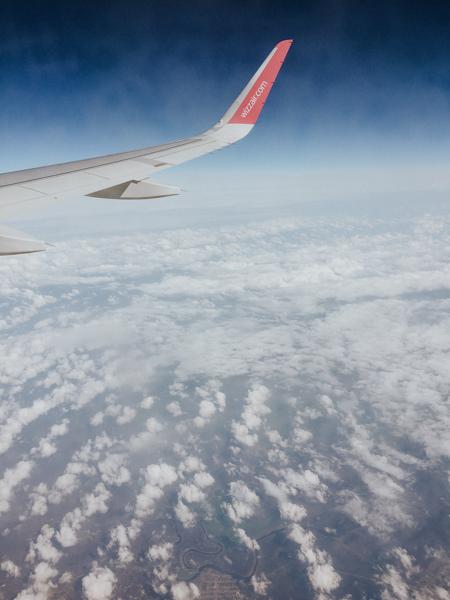 This is the shortage of life, filled with trips – everything fades faster than expected. I wish I had notes / vlogs or something… which reminds me that you can watch my video from my entire stay here . :)

/this is automatic translation via Google Translate/

Now, however, lucky me, I have the opportunity to experience those moments again. :)

So … our decision to visit Paris was quite spontaneous, like all other places in the last year actually … despite the fact that neither me nor my friend had been traveling by plane. My panic from the unknown, however, had faded and one night, yes, we decided to get tickets. We found the right ones from Wizzair and the emotion began. A big factor was their low price (then they were about 200lv(100EUR) per person, now I know you can find even cheaper ones like about 80-90 leva for both directions). The truth is that making your trip alone is so much cheaper than what travel agencies offer. If you are interested in how – tell in the comments and I will share our validated methods. :)) </ em>

Our enormous journey was actually 2 days and a half (March 13th to March 16th). : D and how did we manage to see all the bigger sights in this huge city, do not ask.

I will split the posts by days. Hope to be able to share everything since its all a huge mess in my head. : D </ h4>
We booked the hotel in advance. We tried to choose one as near the subway as possible, which turned out to be one of the largest in Europe with its 16 lines … for God’s sake! There are 2 in Sofia and I’m getting lost here pretty often! So for the hotel … it was quite accidental we chose it in the Montmartre district, which I personally liked.

In advance, we had made a program to shuffle everything and make sure the sites were open on that day (some of their sights have an absurd working time, for example the Louvre does not work on Tuesdays, and works later on Thursday. also depends on the season).

We arrived at noon, but as Wizzair is landig a bit far away from the Paris center, we had an hour with a bus (about 20 euros/direction a person unless you buy it beforehand). The first slight heartbeat I received was that the bus stop at the airport itself was not the most obvious, so we flipped for a while like headless flies until we found it. The plus is that they do not just run one bus at a given time, but several times after each other, even if you drop the current one after it, there is at least one more after that, then you will have to wait until the next hour.

LAnding at its end stop(Porte Maillot), we were all familiar with it as if we had come more than once … thanks to Google Street View. : D

Then our adventure continued in the metro, where, against any logic, the cashier did not know English. Well, the next time we needed to buy tickets, we took advantage of their machines for those who after a little research became quite easy.

We settled in the afternoon, on a plan that gave us time to go and see the Sacre Coeur Basilica and shop for some of Fragonard’s magic perfume (I’ve read half of the internet until I find a nice souvenir perfume shop at reasonable prices …).

I was not sure whether to include the details of our experience at the hotel, but oh well .. Hotel Du Mont Dore is close to Rome’s metro station, looking friendly despite its two (already looking stars). 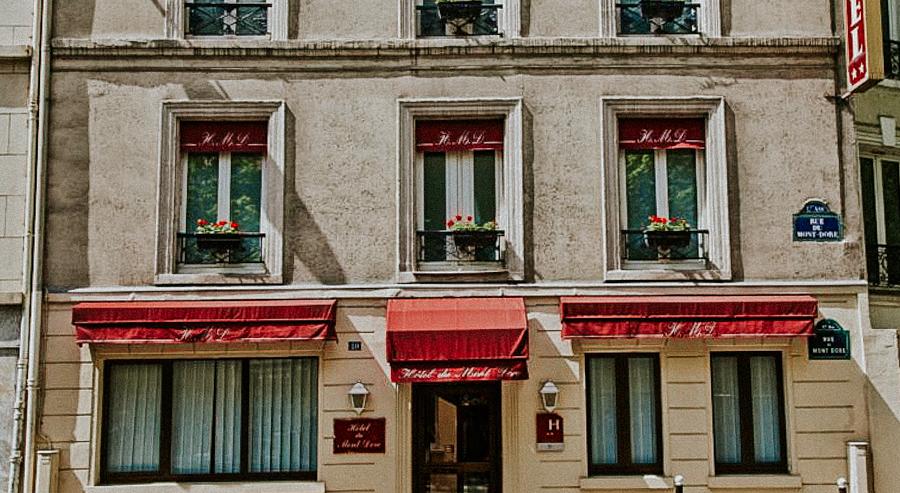 We arrived there right after the time of accommodation, because we are educated, as opposed to some others (wait for it). It turned out that the room that was reserved for us has not yet been released .. could not evict the guests, although the time of departure had passed 2-3 hours ago! wtf? .. ok .. no problem, nice were .. we offered another room, but our bed seemed somewhat small for 2 persons, and looked slightly narrow as a whole. They were trying make us take this second room telling us it was just renovated, but I personally liked the other one more. This palace was in front of our reserved room .. It looked quiet and intimate.
Minus later came guests from the neighboring room, Spaniards who had apparently come to bed and did not leave their room, spoke loudly at any time, and sleeping was a bit difficult.
Another surprise turned out to be the ceiling. Several times we woke up with a strange noise that looked like scratching from different directions over us. I I personally startled too many times for my fragile age. : D One of the evenings we found out that the ceiling itself was actually made of plateaux-like matter, looking like something solid. The illusion collapses when you notice the little step of a mouse running on it without a gram of worry. The panic will not make it up and fall down to sleep with us for at least a few hours. : D
& lt; / lyric deviation & gt;

So … we reached the basilica. 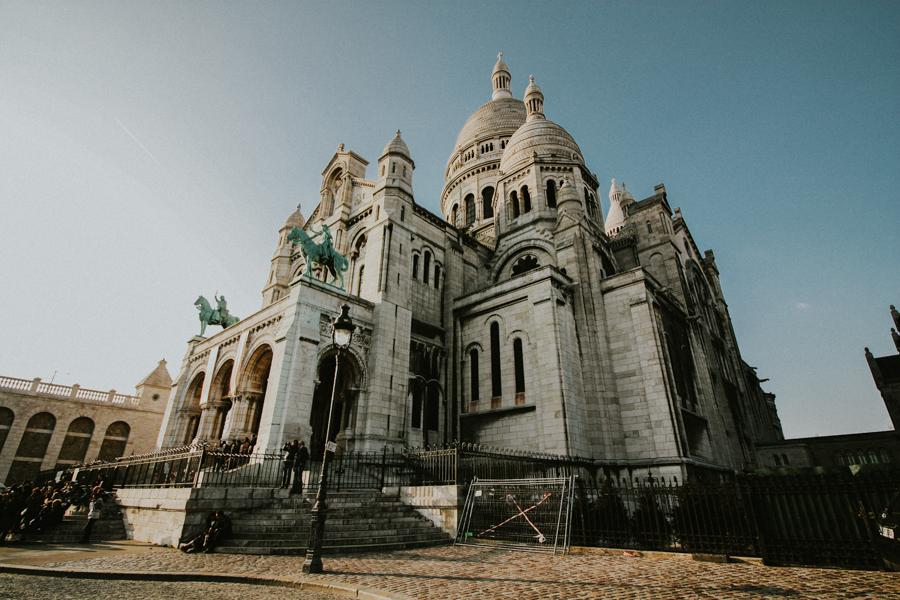 Sacre, as we began to call it gallant, is a wonderful place. It is located in one of the highest parts of Paris, overlooking the entire city. Inside is still a working church, which makes it less friendly, but if you have the desire and strength (because I and my feet had no longer, for no reason to speak) you can rise to one of its towers (about 300 steps, entrance is somewhere to 6 euros).

It’s also good to be careful with the negro-merchants who are so naughty and cheeky that they can get around a couple of times at a time and torture you to tied you with colored thread on your hands to give them a penny. : D

The place itself is really wonderful, just not the hundreds of people who think the same way ..: D is also convenient for picnics, because there were a lot of people, resting lazily on the lawns. 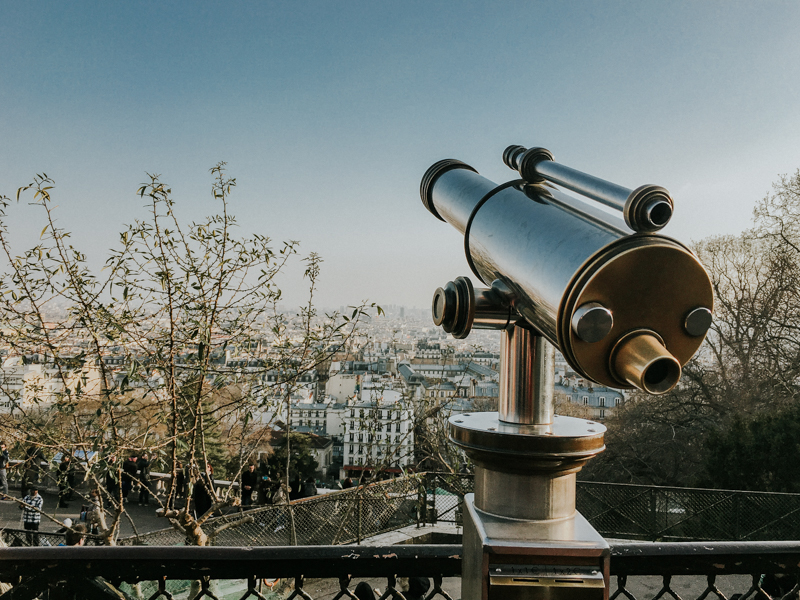 One of Fragonard’s shops is right next to the Basilica … perfect for us. As soon as they came in, they welcomed us politely and let us look at each other without getting caught in our hands for fear of stealing something. It was only after we asked them for help that they immediately responded and even though they realized that we would not leave much money in there … we only went for small souvenirs, served us very kindly, gave us testers and gifts. Honestly, just because of this attitude, I would come back again. :) (Little info: The price of one set of gift perfumes is 35 euros.) 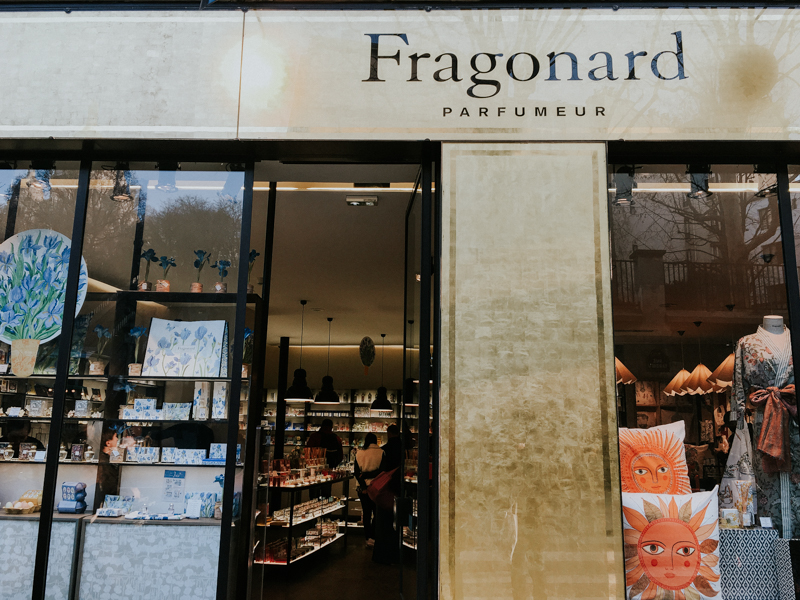 After him, on the quiet streets (literally, there is a market and a madhouse in front of Sacredo ..), a few perfumers were put in. Closed. 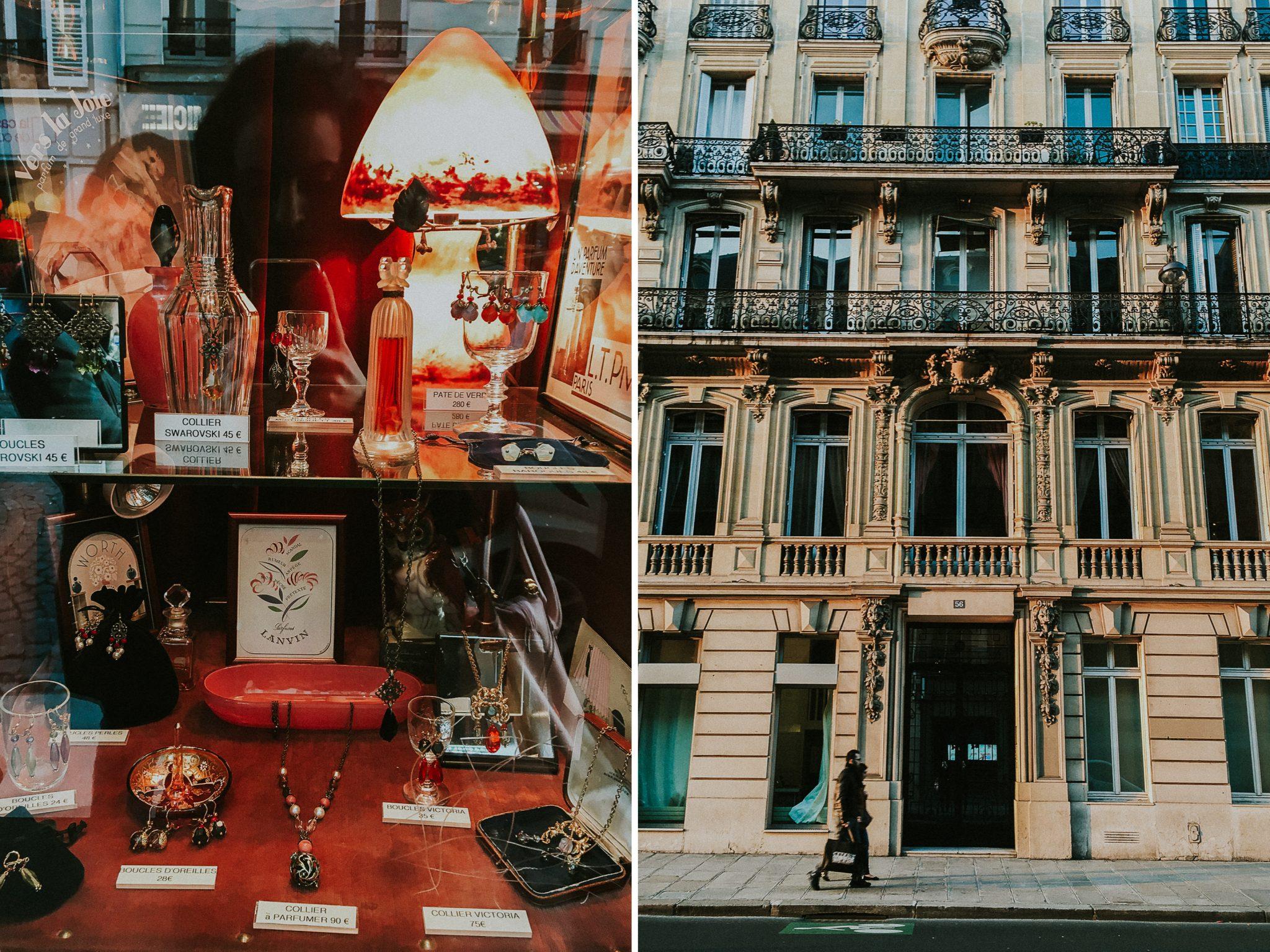 Then we decided to go to the beautiful Galleries Lafayette Mall in the next two days, we would have no free time. Who can assume that shopping malls and shops in Paris, Saturday and Sunday do not work. Life is obviously different from ours here in Bulgaria. :)
But on the other hand, we saw our first sunset in Paris, which combined with fabulous architecture (which so much reminded me of that in Sofia) made it even more magical. 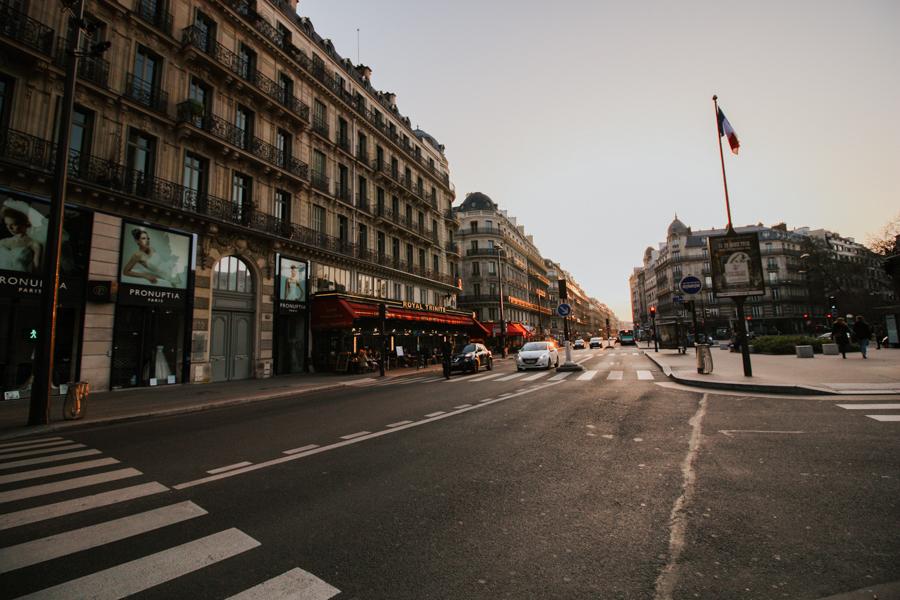 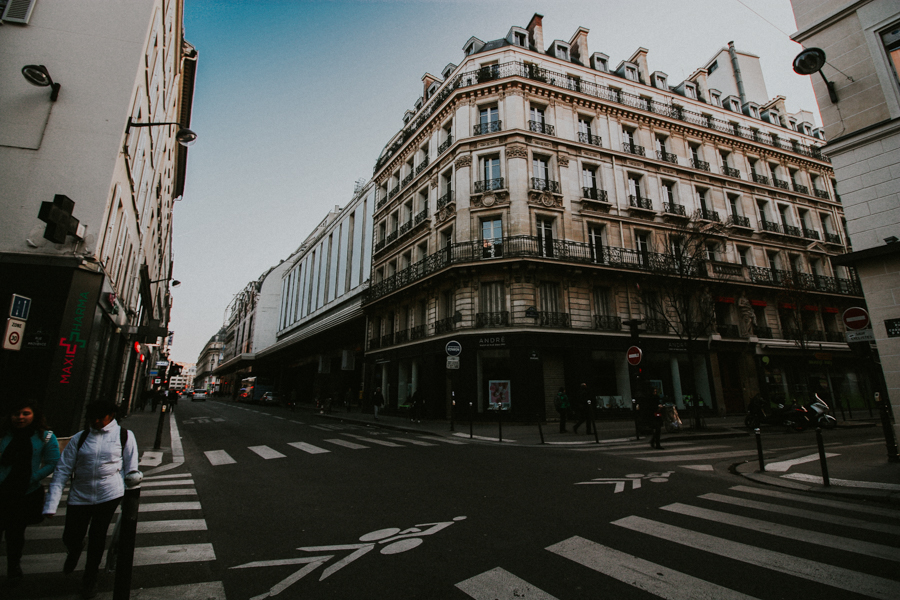 We walked a little further down the streets of Paris and honestly I felt rather strange. Somehow my dream was a habit. And it seems like something is lost when you do it.

Here, by the way, I sit and freeze from the cold, because March .. winter is.: D My legs hurt and I mumble. Yes. And the church behind me is called Eglise de la Trinité.

It was our first day there. The next one was waiting for us in front of the Louvre. :)

P .: The subway was extremely easy to handle. There are signs for everything, and there was no place where even if we wanted to be lost. : D