Click here for Part 1. And here for the beggining of day 2. ahere It is the second of the day. If you haven’t watched my video form Paris, here’s a link. :)

The palace of Versailles was one big desire for me. I knew, that the fairytale will be full and I couldn’t wait to enter this amazing atmosphere.

To get there we got up early and we took the subway to the Eiffel tower station, where it crosses with the RER trains. We got on a train and didn’t even notice when we arived. I can’t believe we didn’t get lost in Paris, at all. :D
The entry for Versailles is free for people under 25 too. And you don’t need to go for tickets, directly use your ID. The gardens were free for everybody.
Now I think that i should have, photographed the situation in front of the entry, when we arrived. The queue was terrifyingly huge. And moved so slooow. We had time to even listen to Spanish show of the teen girls in front of us. I think, they had love triangles and quite severe problems. And if you have not met Spanish students in group, let me tell you – they insist everyone around the to hear and see their emotions.
So.. we got to the entrance… entered… and because of the huge crowd around and lack of any glaring signs, somehow went to the gardens themselves. The confusion “where, for God is the entrance to the halls?!” continued at least until afternoon.
Anyway.. the gardens are already ridiculously large, so we could start with them. It was really nice that, Information desk here also gives maps of the whole thing. In the middle of the park there are a few mini-palaces, which were also free for us.

The first picture, I’m placing here is something like “what you think it, looks like .. and what it actually looks like”. :D to shoot on tape clean image, So if you want to take a clear shot without many stranger faces in it, you have to be really patient. Everywhere. 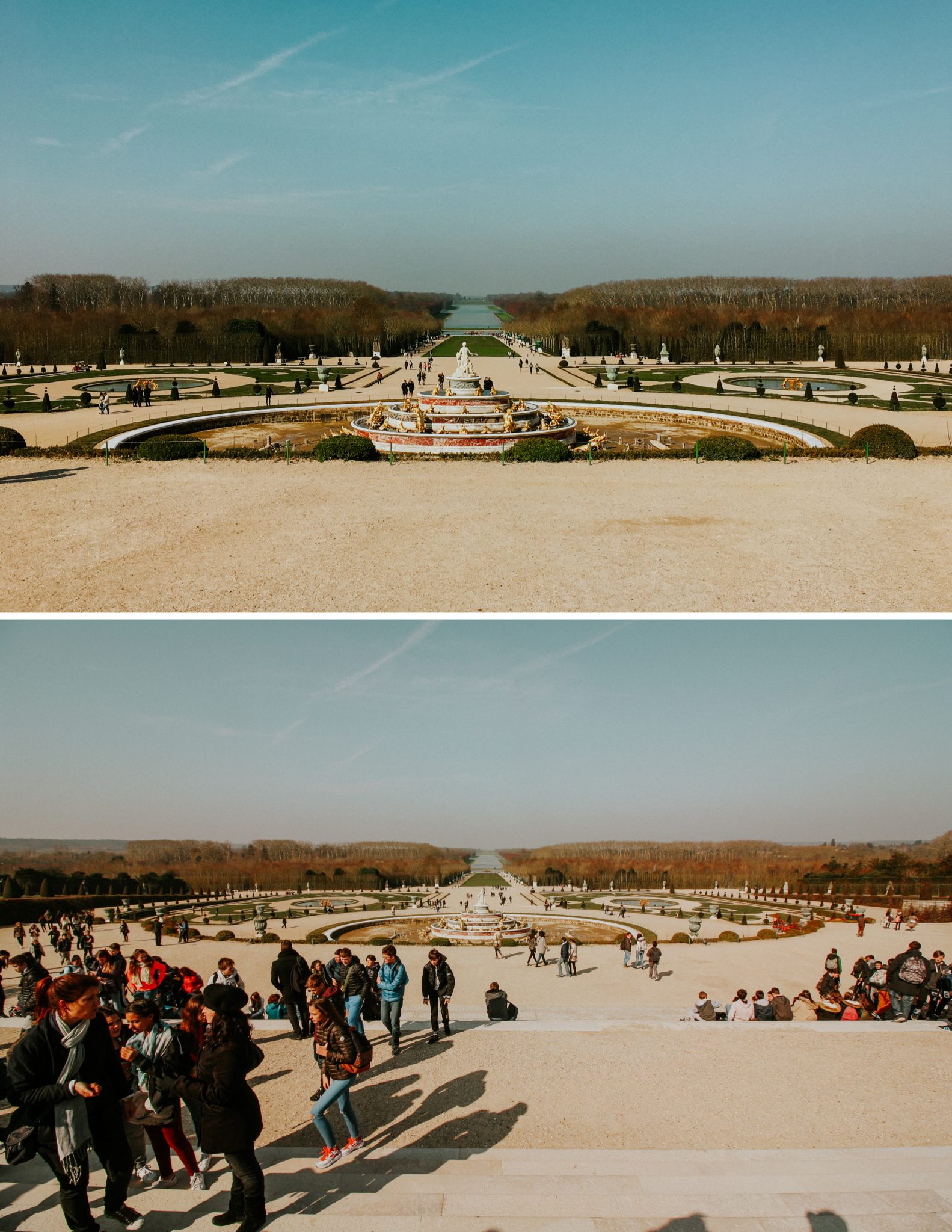 In the park there are all sorts of attractions. Unfortunately, the fountains were not yet on, but it looked like a place, where you can spend a whole day at least. 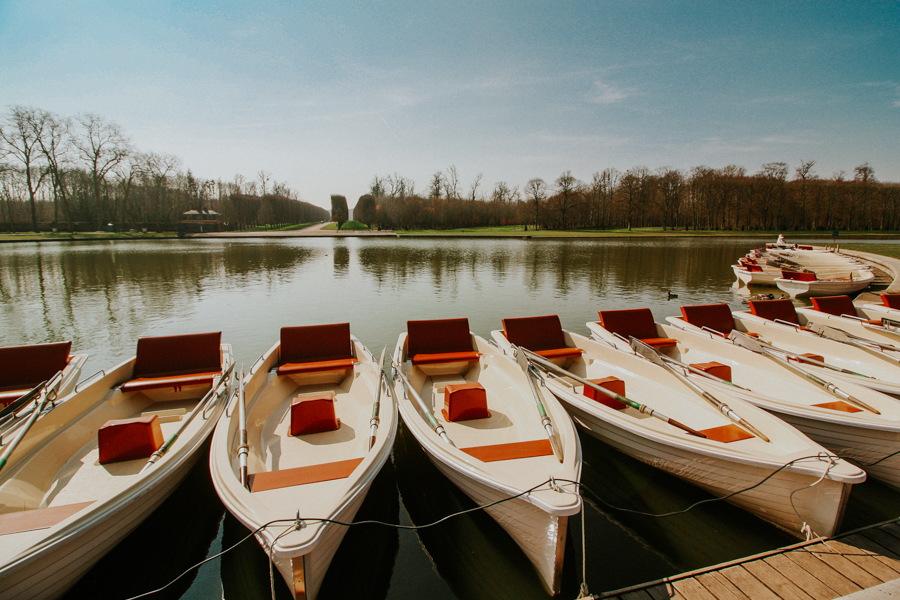 We set out to walk. And came to one of the small palaces. Don’t remember its name. but I think, it was the closest. Every entry had its detectors, of course, but at least so far in the park the crowds were not so big. 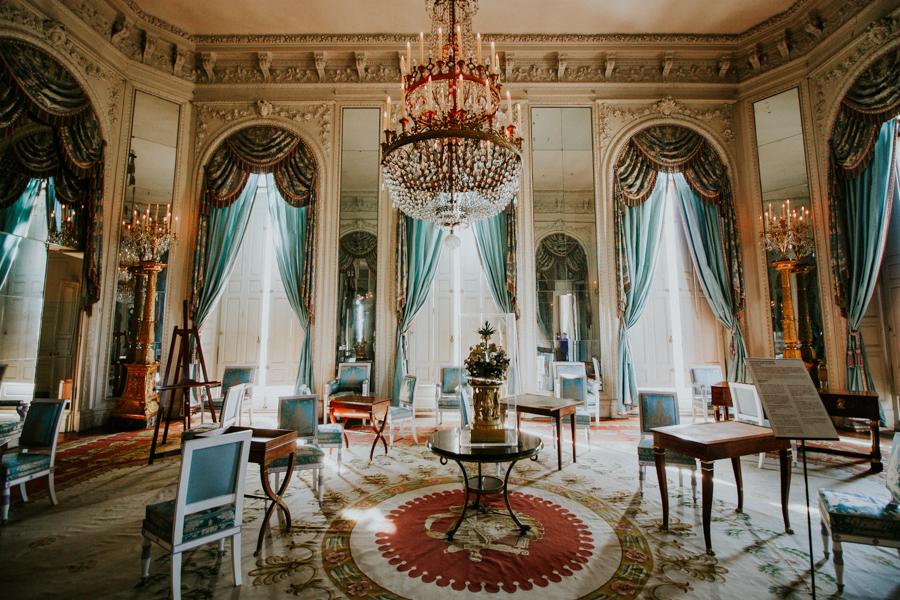 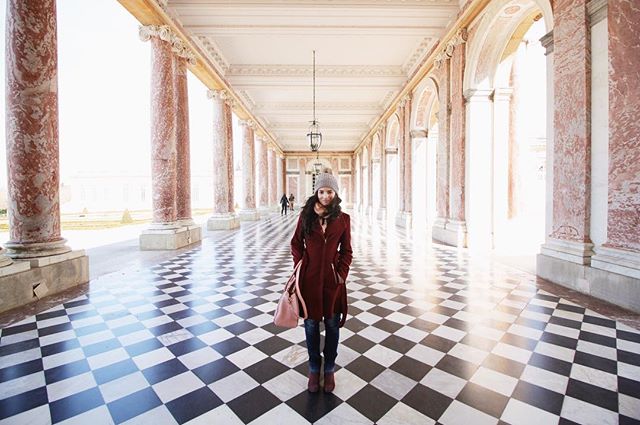 Honestly in that particular place I liked more the exterior. Inside it wasn’t anything special. after all we’re in Paris for 3 days already… we’re expecting more. :D This picture was assembled from you2, This photo was a combination of 2 because the whole timesome stupid tourist was entering the frame. 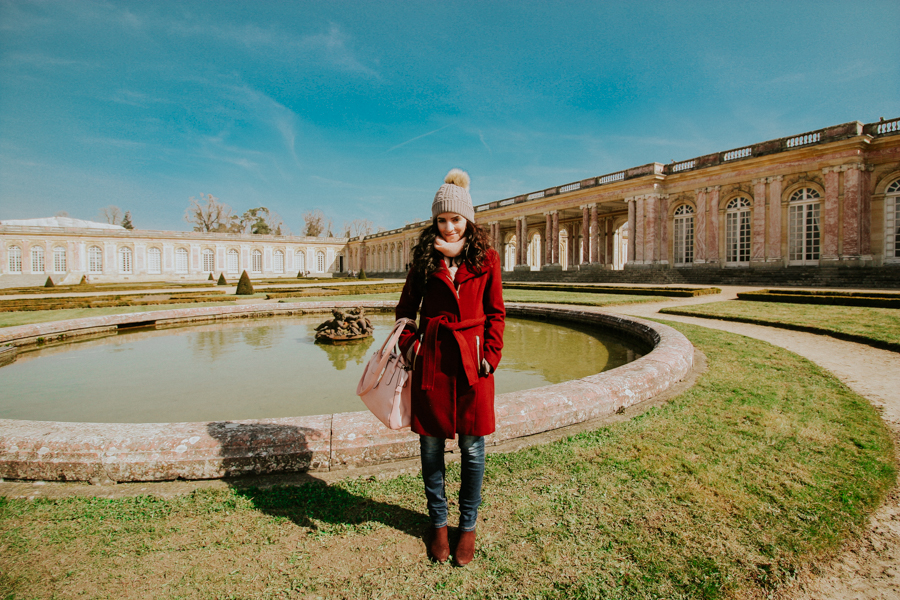 So when I say, that is a huge place, I mean really HUGE. Even after the first palace my feet were off and I had no more strength to continue. In front of the exit stops a small train, you can pick up from the beginning of the park and you walk around the main attractions in it. There were 2 routes, so it depends on where you catch it and where it drives.
It was like a gift from God .. this train. 4Euro per person to take us to the starting point, which lies directly in front of the great palace. 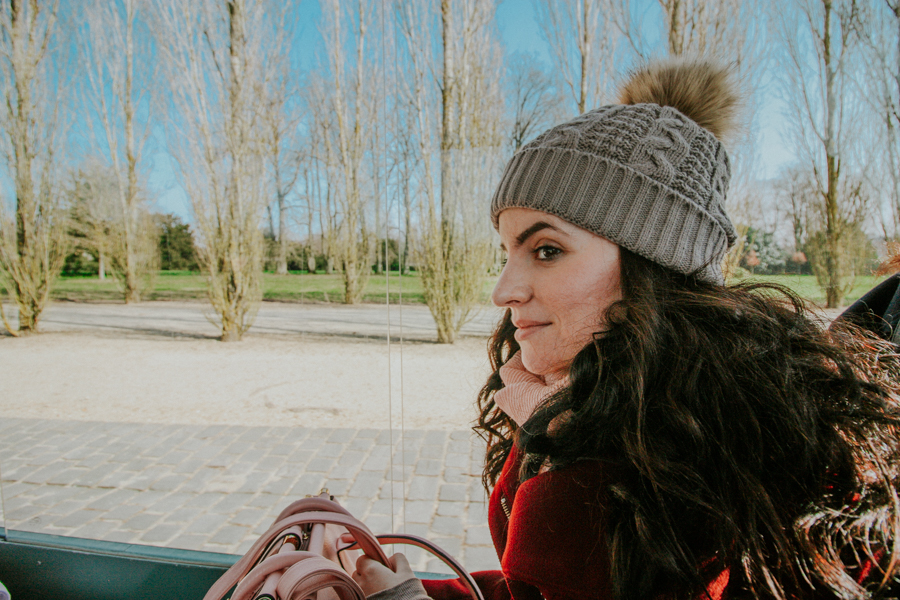 Then we ate a bit on the stairs.. like normal tourists, and started to look for the entrance to the main hall. that meant, We had to re-enter the same path as the morning. And pray someone from information desk to guide us. Imagine our surprise when 3 in the afternoon we went to the main gates and there was no one in the queue.
Then it turned out, that the entrance to the palace is in his yard. 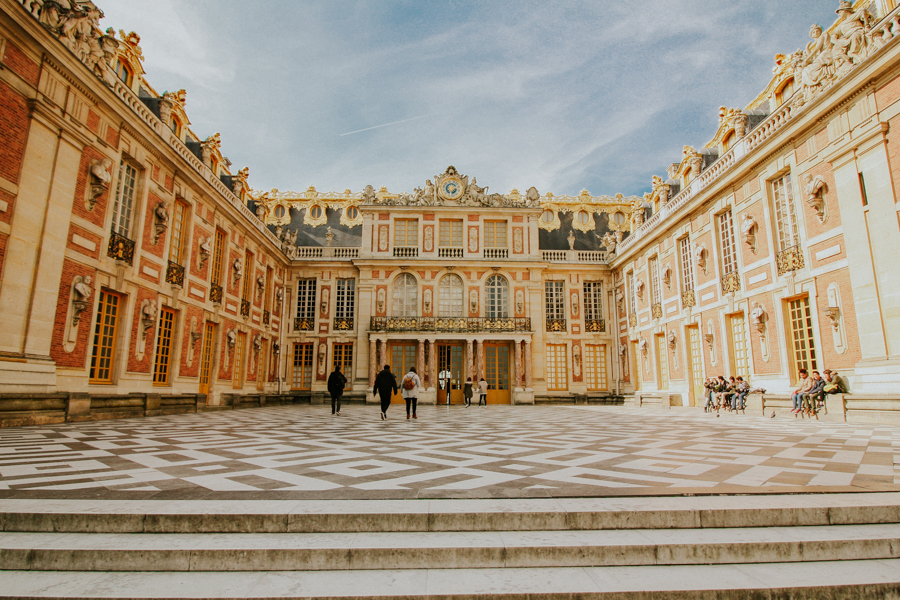 Inside the halls were more magical than those in the mini-castles. You could rent an audio guide, that are telling you stories in your ears.
Here is a picture of the whole Versailles and how it appeared once in someone’s eyes. 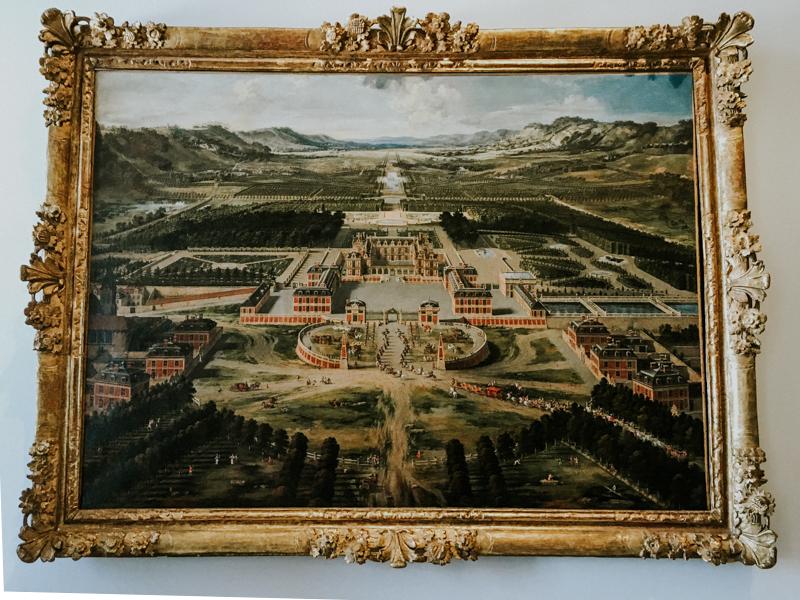 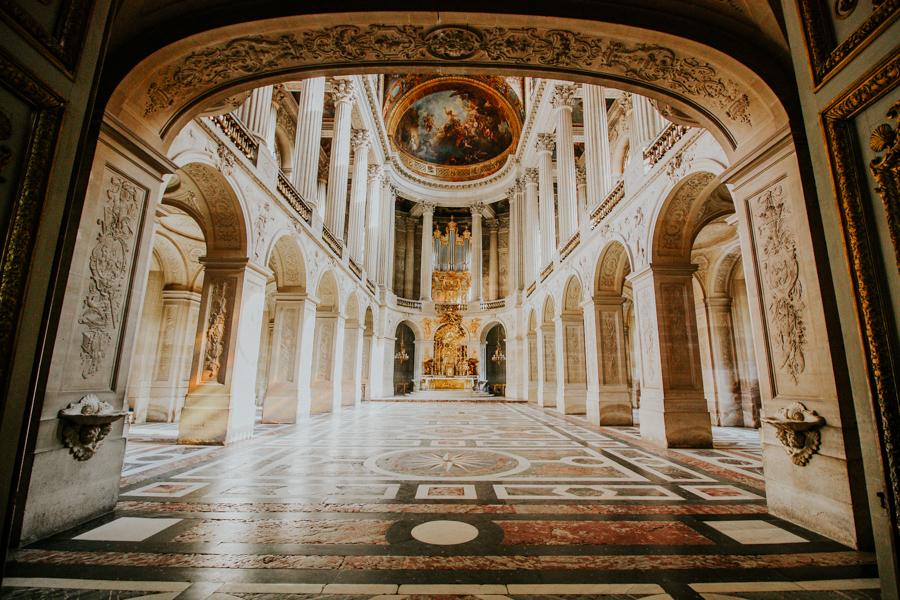 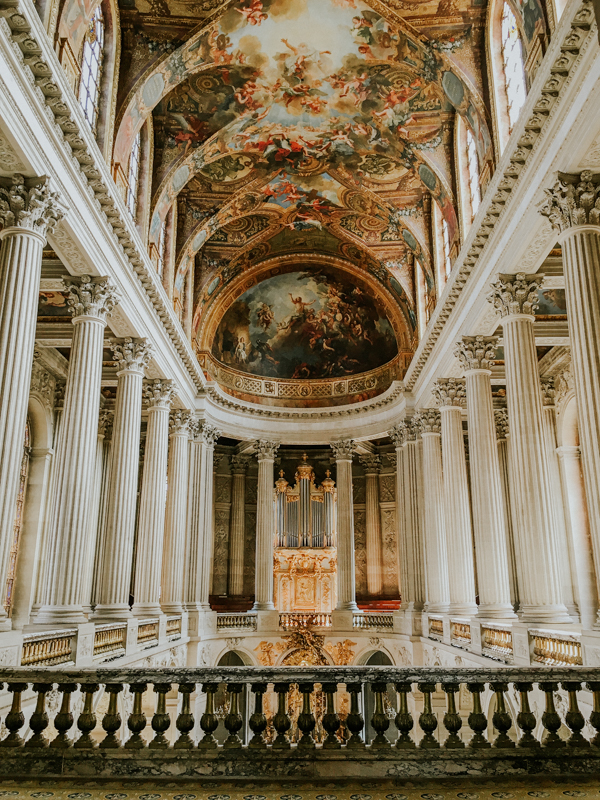 In front of this room was a lobby, in which I carried my note, that I sit at the base of the columns, instead of on the benches(which were taken..) :D Otherwise we waited a lot to make such beautiful pictures.

On the photo below you can see one royal bed, which I wouldn’t refuse to have.

I think, you can guess from my rich vocabulary, that we didn’t take audio guide. :D

We just enjoyed the magnificent architecture. And I constantly imagined what it was to live in such a place. :) 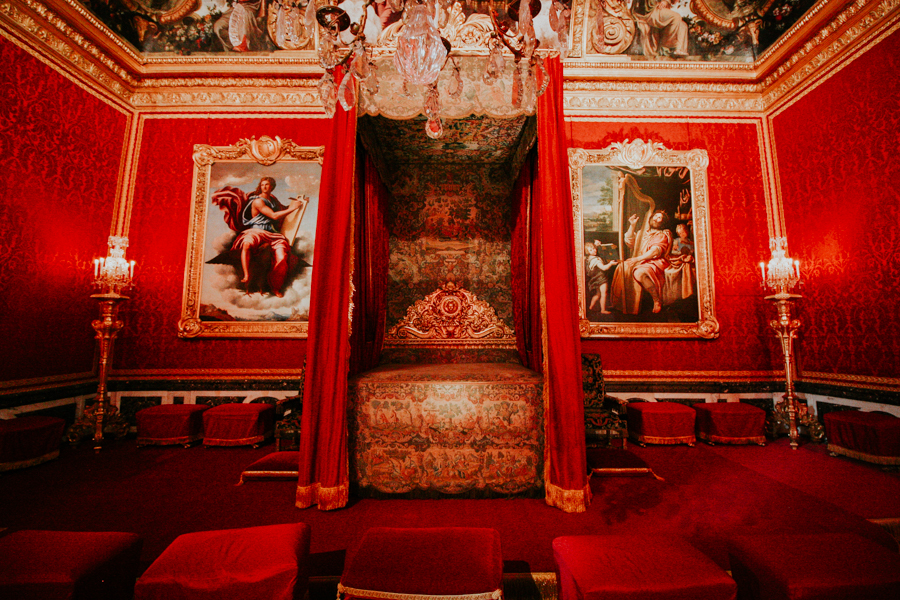 Here is perhaps the most famous room in Versailles – The mirror hall. This is a place, where it is almost impossible to make a decent picture. In this regard, its a copy of the hall with Mona Lisa in Louvre.

Insanely beautiful, detail is everything. And if the other tourists weren’t stepping on us and pushing us most of the time it would be wonderful just to watch and absorb every detail. 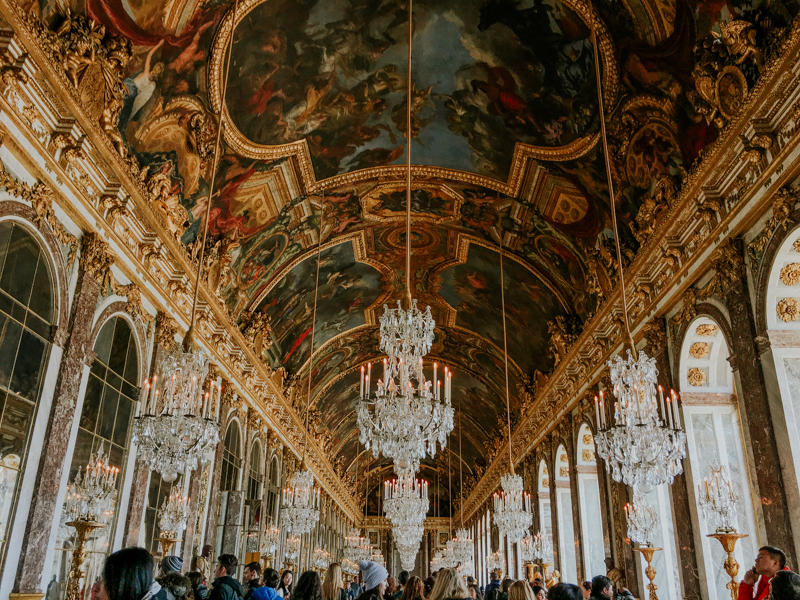 If you ever go there I would advise – Watch the ceilings. So many people rush to reach the most popular place and miss an incredible magic. :)

Really worth to stay at least a whole day in this gorgeous place. To be able to appreciate every detail fully.

The post is relatively short because there you feel with eyes… not enough words, to replace this experience. :)

In the afternoon we went to the most uninteresting to me – the pile of iron, called Eiffel Tower. For her – I will share in my next post.